For MMA in the US, a non-championship mixed martial arts contest is set at three rounds, each round no more than five minutes in duration with a rest period of one minute between each round. Championship contests (and possibly future featured non-title fights) are set for five rounds, each round no more than five minutes long with a rest period of one minute between each round. However, different MMA organizations, like DREAM (headquartered in Japan) for instance, have different round lengths.
MMA Scoring
Contests are now scored by three judges who use the “ten-point must system” (which is also used in boxing). Judges must give the winner of a round ten points, and the loser nine points or fewer. A knockdown usually results in a score of eight for the fighter who was knocked down and ten for the opponent. If the fight progresses through all scheduled rounds, the sum of the scores for each round is tallied for each judge in order to determine the winner of the match. If a fighter is unable to continue the match, the fight is ruled a “no contest.”
If a fighter loses points by committing fouls, or a round is without a clear winner, this may result in awarding an equal number of points to each fighter. So even with an odd number of rounds and an odd number of judges, draws are possible. Judging remains highly controversial and as the fighters always say, “Don’t leave it in the hands of the judges.”
The referee and ringside physician are the sole arbiters of a contest and are the only individuals authorized to enter the ring/octagon at any time during competition and to stop a contest. Warnings sometimes precede fouls. A fighter is not penalized but is issued a single warning only for minor infractions like holding the fence or holding an opponent’s shorts.
MMA Rule Set
The Unified Rules of Mixed Martial Arts is the most commonly used rule set and has been adopted by all state athletic commissions in the United States that regulate the sport. Most global MMA organizations also use the Unified Rules. The Unified Rules of MMA identifies twenty-nine specific acts as fouls. The list includes: eye gouging, biting or spitting, groin attacks, striking to the spine or the back of the head, throat strikes, clawing, pinching or twisting the flesh, grabbing the clavicle, kicking/kneeing the head of a grounded opponent, attacking an opponent after the bell has sounded the end of the round, timidity (including avoiding contact with an opponent, intentionally or consistently dropping the mouthpiece, or faking an injury), and interference by the corner. (For a full list click here and see “8. FOULS”).
When a foul is committed, the referee calls time to check the fouled contestant’s condition and to assess the foul to the offending contestant. The referee deducts points and notifies the cornermen, judges, and the official scorekeeper. A fouled contestant has up to five minutes to recuperate. Also, the referee may disqualify a contestant and terminate a contest based on the severity of a foul or after any combination of three fouls.

It should be noted that variations in weight classes exist depending on the organization in which the event is to occur. For a variety of reasons (mainly historical), different weight classes can use the same name in different organizations. For example, a boxing Middleweight weighs up to 160 pounds, a UFC Middleweight is 185 pounds, and a PRIDE Middleweight was 205 pounds.[16]
Yet, due to the competitive nature of the sport, additional weight is seen as an advantage. Thus, weight limits are nearly always set by the promotions themselves. These categories differ from organization to organization but are usually comparable. In the United States, the Unified Rules states that there are nine classes for MMA contests and the weights for each of the classes are as follows:
• Flyweight: 125 pounds and under
• Bantamweight: 125 to 135 pounds
• Featherweight: 135 to 145 pounds
• Lightweight: 145 to 155 pounds
• Welterweight: 155 to 170 pounds
• Middleweight: 170 to 185 pounds
• Light Heavyweight: 185 to 205 pounds
• Heavyweight: 205 to 265 pounds
• Super Heavyweight: over 265 pounds[17]
Because athletes weigh-in the day before the fight, they commonly cut weight, sometimes extremely, and weigh considerably more come fight time, which can be unhealthy. 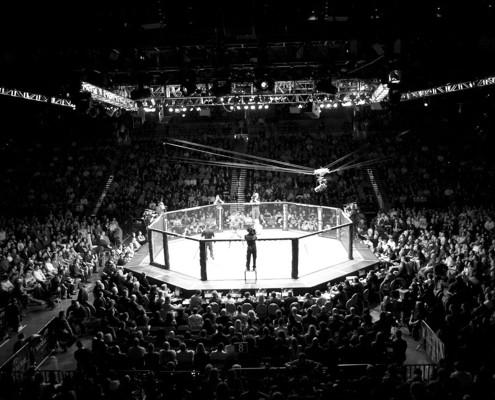 According to the Unified Rules, the use of any illegal drug by a contestant results in immediate disqualification and disciplinary action.
In order to detect prohibited substance, contestants submit to urinalysis or other laboratory procedures ordered by commission-appointed physicians. Refusal to submit to such testing results in immediate disqualification and suspension.
In terms of penalties, a contestant who tests positive for illegal drugs is penalized as follows: a first offense is a 90-day suspension, a second offense is a 180-day suspension and mandatory completion of a supervisory treatment program, and a third offense results in a 2-year suspension and mandatory completion of a supervisory treatment program.
MMA Safety Equipment
Before gloves are placed on a fighter’s hands, the bandaging and tape must first receive the approval of the commission inspector, in the presence of the commission inspector and of the manager of the opponent.
Male contestants are to wear a foul-proof groin protector, and all contestants are required to wear a mouthpiece. If a mouthpiece is involuntarily dislodged during competition, the referee will call time and replace the mouthpiece at the first opportune moment, which does not interfere with the immediate action.
In terms of apparel, each contestant must provide themselves with mixed martial arts shorts, bikers’ shorts, or boxing or kickboxing shorts/pants. Contestants may not wear a shirt or gi (in Japanese, gi means dress or clothes, and is basically a pair of workout pants), or shoes of any kind during competition. A contestant’s physical appearance, according to the Unified Rules, “Must be clean and present a tidy appearance. The excessive use of grease or any other foreign substance, including grooming creams or lotions or sprays, may not be used.”
If an official concludes the head or facial hair presents a hazard or will interfere with the contest, the contestant may not compete in the contest unless the circumstances are changed. Without limiting the foregoing standard, hair must be trimmed or tied back in such a manner that it will not interfere with the vision of either contestant or cover any part of a contestant’s face.
Contestants may not wear any jewelry or other piercing accessories while competing.

When the rules are broken, the discipline can be very serious. As one example, after losing to Josh Koscheck at UFC 113 (in Montreal), Paul Daley lost his temper and was effectively banned from Ultimate Fighting Championship for the rest of his life. Several seconds after the bell sounded at the end of the final round, the victorious Koscheck walked back to his corner with his back to a visibly upset Paul Daley. With Koshcheck’s back turned, Daley connected a hard left-handed sucker punch on Koshcheck’s face (twenty-seven-second clip here).
In a post-match interview, UFC President Dana White promptly said Daley would not fight in the UFC again:
I don’t care if he fights in every show all over the world and becomes the best and everybody thinks he’s the pound-for-pound best in the world—he will never fight in the UFC ever again. He’s done. You don’t ever hit a guy blatantly after the bell like that, whether you’re frustrated or not. It was probably one of the dumbest things I’ve ever seen because he is a talented guy, and he is one of the best 170-pounders in the world.

“The following is taken from an article at http://pastormark.tv/2011/11/09/a-christian-evaluation-of-mixed-martial-arts Dated: November 9, 2011 written by Pastor Mark Driscoll. Its a lot to read, but check it out if you have the time. Its good stuff and will help ya learn more about MMA. It will also help you better understand why The UFC is so exciting to the folks in your community right next door to your church.”